The coup in Myanmar – which occurred on February 1st – has unfortunately pushed the military to disrupt country-wide access to the internet.

Update: Internet connectivity in #Myanmar has fallen to 50% of ordinary levels as of 8:00 a.m. local time amid an apparent military coup and the detention of civilian leaders; pattern of disruption indicates centrally issued telecoms blackout order 📵

And again, on February 7th:

A week after the onset of internet disruptions in #Myanmar amid a military coup and detention of civilian leaders, connectivity has returned to 95% of ordinary levels. However, social media remain restricted for many and the situation remains tense 🗓

Burmese mobile carrier Telenor notified customers that “All mobile operators, international gateways and internet service providers in Myanmar received a directive on 5 February 2021 from the Myanmar Ministry of Transport and Communications (MoTC) to, until further notice, block the social media platforms Twitter and Instagram.”

How can roaming data help bypass the blocks? 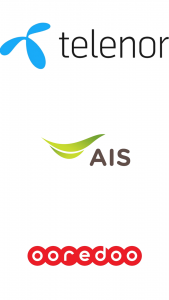 A Burmese user roaming on a foreign carrier may still have cellular data access, even while local data is blocked. As seen with data usage in China, roamers are able to access Facebook and Google by routing data to the originating carrier (outside the country), with data requests coming from a subscriber’s home country.

In the case of a Burmese user using the AIS SIM2Fly roaming SIM, their traffic would originate from an AIS data centre in Bangkok. Traffic would not be considered local requests, and the user would be considered a subscriber of an international carrier – in this case, AIS Thailand. This is made entirely possible by the fact that there is an established agreement between carriers like AIS (Thailand) and Telenor or Ooredoo.

Note that Myanmar has the ability to cut access to this roaming data route, but it’s likely that because this route serves the international community, it would be one of the last routes to be cut.

The AIS SIM2Fly is a roaming SIM from Thailand that could help Burmese users access data thanks to international data agreements. If you have a SIM2Fly, you can add credit and additional data packages to keep using it for years to come. Once their first data plans are completed, users in Myanmar can use the Ready2Fly 2GB Neighbors data plan – 93 THB for 2 GB over 7 days. Add credit and dial *111*407# 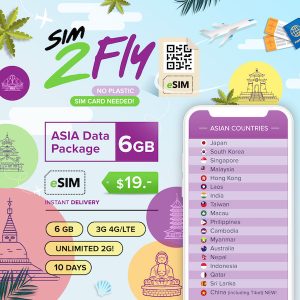 The eSIM2Fly digital eSIM comprises all the features of the physical SIM2Fly, but it can be delivered to you digitally, in the form of a QR code or a manual entry code. This means that anyone with a supported device can acquire their SIM via email or text message. That user DOES, however, need an internet connection in order to download the SIM Profile for the first time. Thus, such SIMs must be added while the user has a data connection. Once the embedded SIM is added, it cannot be removed or transferred.

On Feb 7, esim2fly.com experienced its busiest day ever! Our site went down for 20 minutes due to an avalanche demand for eSIMs. As the leading online reseller of the AIS eSIM2Fly, we were caught off guard by the demand.

Currently, we are out of stock of Asia plans – in the meantime, you can check out our Global Plans which have the same functions, should you wish to purchase one. Please follow our Facebook and Twitter for stock updates.

If you are using the AIS eSIM2fly in Myanmar, please consider leaving a review to help inform others about where it is working and how well it is working!

To install an embedded SIM with QR Code:

On iOS devices you install it with these steps.

Open Settings > Cellular > Add Cellular Plan; the camera app will open, and you should be able to scan your QR code.

Other ways to avoid being blocked