eSIM in Thailand 🇹🇭 : everything you need to know

eSIM in Thailand: everything you need to know

Everybody loves Thailand. Thailand has one of the most diverse and delicious dishes. When on vacation in Thai, one of the best things that you will enjoy is the food and you cannot eat the same meal twice because there is so much to choose from. The food is not only delicious, but it is cheap as well. There are food vendors on the street who typically sell delicious food at a cheaper price. So when in Thai, you don’t need to worry about spending more on food because food is affordable even in the hotel and resorts.

Thailand has the best beaches in the world. The beaches have warm, clear water, and stunning vistas. The marine life is just spectacular. There are many different types of beaches in Thai; from quite, to laid back, to party all night.

Not only that Thailand has a lot to offer, all major local carriers support eSIMs as well!

Traveling to Thailand? Stay connected by purchasing an eSIM online!

eSIMs are easy to activate without the need of physical swapping of cards to install a connection. They also allow for another physical SIM to be used at the same time.  Travel eSIMs are especially good as you can get them digitally right before you travel. eSIMs is perfect for travelers as it removes the need for individual SIMs. You can also upgrade devices in a breeze by registering your new device with your cellular network provider.

The company is controlled by the Intouch Holdings (formerly Shin Corporation), headed by Temasek Holdings, a Singapore government-owned agency. AIS listed on the Stock Exchange of Thailand on 5 November 1991. As of 23 December 2011, Intouch holds 40.45 percent of the shares of the company and Singapore Telecommunications (also majority-held by Temasek) together with Thai Trust Fund and OCBC Nominees holds a 23.32 percent stake.[

Temasek bought the AIS brand through the 2006 acquisition of the Shin Corporation from ousted former Prime Minister Thaksin Shinawatra.

In February 2014, in a conflict between the People’s Democratic Reform Committee (PRDC) and Shinawatra, the PDRC called for a boycott of AIS, wrongly believing it to be owned by the Shinawatra family. 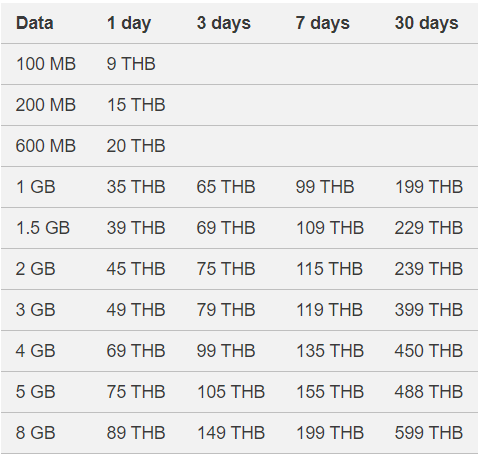 dtac, for Total Access Communication is Thailand’s 3rd largest network by the number of users. It’s partly owned by Telenor group from Norway and is the network that owns the biggest wireless bandwidth in the country. Its prepaid brand is called Happy.

Check out their local prices and coverage (in THB ) 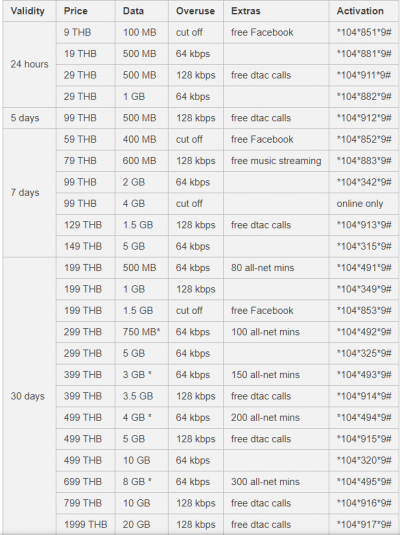 TrueMove is Thailand’s 2nd largest network and the most heavily advertised. TrueMove is part of the larger True Corp. conglomerates, owned by CP Group which is the biggest retailer owning all 7-Eleven and Tesco stores in Thailand. 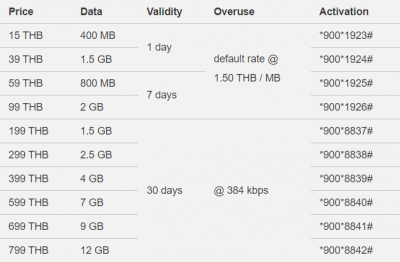 Local SIMs are charging about USD 2.12 per GB.   The price per GB on Sim to fly is USD 3.10 of per GB on the first package then only USD 2.50 for add on packages.   This makes the eSIM2Fly roaming sim competitive with the local eSIMs in price per GB.

Check if your device supports eSIM prior to purchasing. See our full list of known eSIM devices.
How do I install an eSIM with QR code?

AIS Roaming parters provide the local data in each country.  The SIM will auto connect or you can choose.

For any other questions regarding eSIMs, check our FAQ!