Let’s take a look at your options for eSIM in Indonesia!

Indonesia have most of nature’s best such from pristine beaches and deep sea to tropical forests and mountains. Be wowed by idyllic beaches like in the famous Bali, the emerging Lombok, luxurious Nusa Dua or the quiet Gili Islands. You may also find hiking here amazing as you can hike up the many active volcanoes, such as Mount Bromo and Ijen Crater in East Java, Mount Rinjani in Lombok and Mount Batur in Bali. Many tropical forests here are listed as UNESCO World Heritage Sites in Indonesia like Ujung Kulon National Parkk in West Java and three major parks in Sumatra. Not to forget is the famous Komodo Dragon found in Komodo Island and the permanent glacier at Lorentz National Park in Papua, a part of Indonesia which sets it a bit different from its Asia counterparts.

Not only that Indonesia has a lot to offer, all major local carriers support eSIMs as well!

Traveling to Indonesia? Stay connected by purchasing an eSIM online!

eSIMs are easy to activate without the need of physical swapping of cards to install a connection. They also allow for another physical SIM to be used at the same time.  Travel eSIMs are especially good as you can get them digitally right before you travel. eSIMs is perfect for travelers as it removes the need for individual SIMs. You can also upgrade devices in a breeze by registering your new device with your cellular network provider.

Telkomsel , the mobile branch of Telkom Indonesia, has a market share of about 40% in Indonesia and is the only operator which is active in all provinces. It caters for around 173 million users in 2017 making it the 6th largest cellular provider in the world. It is 2/3 owned by the state through Telekom Indonesia and 1/3 by SingTel from Singapore. 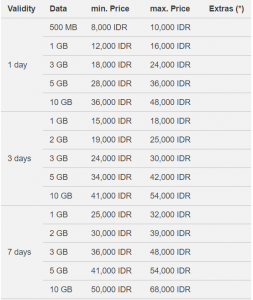 Indosat Ooredoo, has become the 2nd operator in Indonesia with 22% share of the market. It’s focusing on triple play and mostly owned by Ooredoo, which rebranded it in 2015. It has a good coverage on the main islands of Java, Bali, Kalimatan, Sulawesi and Sumatra: Indosat coverage map at low prices.

Check out their local prices and coverage (in IDR ) 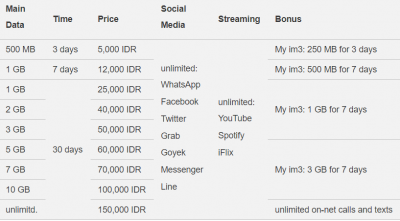 Three, called Tri in Indonesia by Hutchison Whampoa from Hong Kong is now the 3rd provider with the lowest coverage and the cheapest rates. It has a limited coverage only in some main islands. If you want to travel through the archipelago or to remote places, look elsewhere.

Up to now 3 has been focusing its efforts on its 3G network rollout, deploying access to the 2,820 sub-districts, 307 municipalities in 25 provinces in Sumatra, Kalimantan, Sulawesi, Java, Bali and Lombok. As of 2015, the cellco had extended its national footprint to 86% of the Indonesian population. 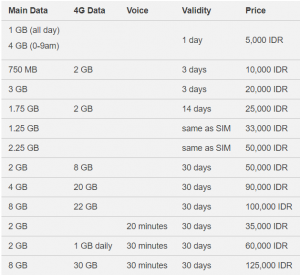 Local SIMs are charging about USD 2.33 per GB.   The price per GB on Sim to fly is USD 3.10 of per GB on the first package then only USD 2.50 for add on packages.   This makes the eSIM2Fly roaming sim competitive with the local eSIMs in price per GB.

Check if your device supports eSIM prior to purchasing. See our full list of known eSIM devices.
How do I install an eSIM with QR code?

AIS Roaming parters provide the local data in each country.  The SIM will auto connect or you can choose.

For any other questions regarding eSIMs, check our FAQ!